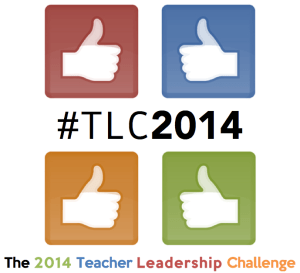 This multipart series is intended to help teachers grow their leadership practice and ignite conversations about education online, through blogging, and in person.

The goal of a teacher leader is to improve the learning of all students through their efforts, collaboration, and influence. The 2014 Teacher Leadership Challenge is a weekly installment activity that poses a prompt on an educational topic or issue. Your challenge is to respond to the prompt in 500 words or less via a post you publish to your blog. The aim is to get more teachers thinking globally about their classroom practice and their own connection to the wider education community. You can subscribe to this blog to get the weekly challenge sent automatically by email.

You can share your post to Twitter using #TLC2014 and spark conversation with educators. In addition to posting on your own blog, you can elect to include your post in the weekly collection showcase blog. To do this, simply email your completed response post to the showcase, at tlc2014.posts@blogger.com Make sure that you include the title of your post with the week of the prompt for proper tagging (e.g., “My Post Title | September 6, 2013″) in the subject line (without “re:”) of your email, and the full post laid out in paragraphs in the body of the email. Posts are automatically published by sending the email. You can embed images and URLs into the body of your email, and the post will publish while maintaining your formatting and layout. Check out others’ responses in the response collection or on Google+ each week, leave them your comments, and get the conversation rolling ahead for teacher leadership.

What role should standardized tests play in education? 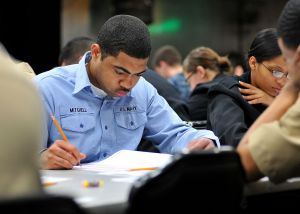 Standardization in education is nothing new. It actually dates back to the 16th century Jesuits, who tried to ensure that students at Jesuit schools anywhere were learning the same curriculum. But U.S. schools did really not undergo serious standardization until in the 1990s. At the the time, there was a compelled effort to respond to a 1980s report that the U.S. schools were falling behind those of other countries. This process underwent three major iterations: America 2000 (George H. W. Bush administration,) Goals 2000 (Bill Clinton administration,) and in 2001 the most recent No Child Left Behind Act (NCLB) of George W. Bush’s administration.

Following from inspiration overseas in France and Great Britain, the U.S. NCLB Act sought to ensure that all students were receiving a high quality education in public schools by highly qualified teachers. School performance was to be measured by students’ success on standardized tests and graduation rates, but moreover the results of student testing would serve as basis for school improvement. Ultimately, standards-based education in general, seems well intentioned and seeks to provide all students a great education.

But in the time that education has become more uniform from school to school, high-stakes testing has become a major rite of passage for K-12 schools. As these standardized tests have evolved, so too has their use in admitting students to post-secondary education programs, rating schools, and evaluating teaching. With the development of the Common Core State Standards, there is a renewed effort to standardized U.S. education, and thus a push for new standardized testing. To have a common set of education standards will require a common assessment to evaluate achievement with them.

While the standards themselves have raised much debate around the country, even including recently that the implementation isn’t going so well, the topic of these nationally standardized assessments, such as the Smarter Balanced and PARCC, has raised considerable issue among educators and the community. “Teaching to the test” is now an all-too-common phrase with a negative vibe just about everywhere. All the meanwhile, as more states move toward teacher evaluation models that are based heavily on standardized test scores, new meanings of the phrase “high-stakes testing” are also stirring the pot.

But what does all of this controversy, discontent, and debate mean for education? Should there be any debate at all? Don’t we need tests to determine if students have learned what we expected of them? What role should standardized tests play in education? Do the tests help us to adjust our instruction for subsequent cohorts of students? Do they really show us which students are achieving? Can tests help us to rate and rank schools, teachers, and school systems? Or, are standardized tests just one of many markers of progress, growth, and achievement in education? What are alternative forms of assessment that compliment performance on standardized tests? How can results from standardized tests help inform education policy, school improvement or instructional practice? Can results from other measures be more, less, or as effective in communicating outcomes?